X-Ray shielding, what is it? The electromagnetic spectrum covers the range of wavelengths of electromagnetic radiation, spanning from radio waves of longest wavelength to gamma rays; the shortest wavelength. X-rays fall between gamma rays and ultra violet light, making them relatively powerful in terms of energy due to the inverse proportionality between wavelength and photon energy.

X-rays were first produced and detected by a German physicist named Wilhelm Rontgen in 1895 – leading to an entirely new field of scientific research, but with their discovery also came their repercussions.

Photons are discrete packets of energy; the fundamental particle behind electromagnetic radiation, including visible light. The defining variable in the range of the electromagnetic spectrum is how much energy each photon that composes a wave has. The photons that compose X-rays have sufficient energy to ionise atoms, being capable of breaking molecular bonds, including those that make up living tissue. These interactions between X-rays and cells are what lead to things such as radiation sickness and the increased risk of cancer by cellular mutation. 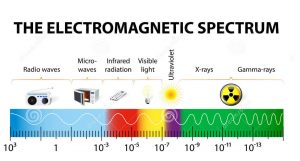 With these risks in mind, it is incredibly important that X-rays and other ionising radiation is dealt with correctly – this includes keeping the exposure time and intensity of said radiation to as minimal as possible whilst still performing the desired task; whether it be for medical diagnosis, treating cancers or even for concealing highly radioactive isotopes.

So how exactly are we protected from radiation? Due to the penetrative power of X-rays, a lot of material is required in order for the energy of the wave to dissipate; the denser the material, the less thick the material will need to be in order to absorb the X-rays – this makes lead an ideal material to use, given its density, malleability and abundance.

Raybloc X-ray shielding products provide maximum safety by concealing the radiation to a specific area through permanent fixtures such as leaded walls, windows, floors and ceilings, but also through quality Raybloc X-ray protective door sets, Fixed Operator X-ray Screens and Mobile X-ray screens; ensuring the radiation isn’t reaching areas it should not be along with maximising the safety of both patients and staff whilst in the shielded areas.

We use cookies on our website to give you the most relevant experience by remembering your preferences and repeat visits. By clicking “Accept All”, you consent to the use of ALL the cookies. However, you may visit "Cookie Settings" to provide a controlled consent.
Cookie SettingsAccept All
Manage consent

This website uses cookies to improve your experience while you navigate through the website. Out of these, the cookies that are categorized as necessary are stored on your browser as they are essential for the working of basic functionalities of the website. We also use third-party cookies that help us analyze and understand how you use this website. These cookies will be stored in your browser only with your consent. You also have the option to opt-out of these cookies. But opting out of some of these cookies may affect your browsing experience.
Necessary Always Enabled
Necessary cookies are absolutely essential for the website to function properly. These cookies ensure basic functionalities and security features of the website, anonymously.
Functional
Functional cookies help to perform certain functionalities like sharing the content of the website on social media platforms, collect feedbacks, and other third-party features.
Performance
Performance cookies are used to understand and analyze the key performance indexes of the website which helps in delivering a better user experience for the visitors.
Analytics
Analytical cookies are used to understand how visitors interact with the website. These cookies help provide information on metrics the number of visitors, bounce rate, traffic source, etc.
Advertisement
Advertisement cookies are used to provide visitors with relevant ads and marketing campaigns. These cookies track visitors across websites and collect information to provide customized ads.
Others
Other uncategorized cookies are those that are being analyzed and have not been classified into a category as yet.
SAVE & ACCEPT
Manage Cookie Consent
To provide the best experiences, we use technologies like cookies to store and/or access device information. Consenting to these technologies will allow us to process data such as browsing behaviour or unique IDs on this site. Not consenting or withdrawing consent, may adversely affect certain features and functions.
Manage options Manage services Manage vendors Read more about these purposes
View preferences
{title} {title} {title}